Looking for a place to showoff, love to pose and play for you and the camera

In search for men with unwashed, smelly, uncut, dirty dicks

Into being used as a sex slave and whore

Only sucking clean masc guys, no gays or fags

I have a bitch nigger boy for you to use, slap his face, spit on him, say racial slurs, spit, snot gargle, group fuck and more

Always need a good over the knee spanking

I have been waiting to be spanked for a while

Looking for a top to piss me

Follow for more Craigslist Boxer Shorts on twitter #craigslistboxershorts
We will tweet our favorite and invite you to do the same. If you see your own ad,  retweet it. LOL

Why Buy Male Erotica When You Can Do It Yourself? 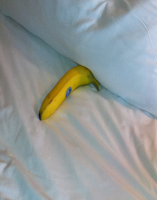 It's all about ideas, baby. Sure you can do it yourself, but pretty soon you run out of fresh innovative designs...Wait that's about fashion or hair. Reading erotica is an idea generator. Basically a nut is just that, a nut. It satisfies an urge just like eating fast food satisfies a moment of hunger. I don't know about you, but I find very little ambience and sensory satisfaction in most fast food restaurants. Although they are trying to step up the game with aquariums and flat screen TV's. But basically they are about satisfying a nut...I mean hunger pangs.
So what's happens in your bedroom after ten years with the same old Joe, or tens years with a different Joe every weekend? Boring. There are no more penis surprises. You've seen that one since forever or you've seen every shape and size imaginable. You've run out of positions to try. You've watched so much porn, until you'd rather watch something different like Let's Make A Deal. But you're not dead yet and you hear that new young couple who just moved in next door going after each other like a pair of wildebeest. But where do you go for fresh ideas? The library? Really the poor librarian  hasn't seen anyone naked below the waist since her trip to Rome and she spent ten minutes ogling Michaelangelo's David until someone told her to keep the line moving. Your Bookstore? B&N has maybe three books on gay sex. All of Halfprice Books' offerings were written before the 80's. So what to do? Ahh go online! Online is where it's happening in the world of gay sex and your quest for new and fresh ideas. You can read in the privacy of your own kindle or iPad right next to that nun on the bus or subway. Reading brings the action eyeball close and if it's eyeball close then it's closer to the biggest sex organ in your body...THE BRAIN! Yes the brain is what needs stimulating. The best brain massage is reading. While you're stroking, I mean reading on your device, you can stop, pause, and rewind without even pushing a button (Maybe hit the back button to go back to that sentence, "The gritty concrete hurt his knees, but the rough hand on the back of his neck..."
So what are you waiting for? An eReader is probably cheaper than a reentry and is going to last a lot longer. Your cock, um brain will thank you. Hit the button and go get some stimulation right now. 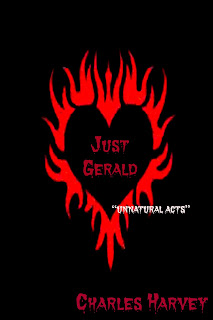 It’s been gnawing at him a long time-- chewing his gut and making his bones feel like somebody’s grating them with sandpaper. Gerald read the yellowed newspaper clipping, looking at the picture of his dark face with eyes wild as a panther’s. The camera captured his wildness and scandalized him on page one.
What about the white boy? He had a dick too. In fact it was his dick down Gerald’s throat. But he was rich. It was Gerald who was sentenced to that long prison term in 1959 for “unnatural acts.”
Gerald picked up yesterday’s fresh paper and read the announcement in Weddings & Anniversaries: “Bud and Cassie McMillan to Celebrate 50 Years of Wedded Bliss Tomorrow” In the picture, Bud looked like Colonel Sanders. In 1959 Bud was Paul Newman, Marlon Brando, and James Dean all rolled into one. Gerald remembered being mistook for Sidney Poitier frequently back in those days. He scratched at the patch of hair next to his left ear and grunted.
Gerald oiled his pistol and loaded two bullets. “Wedded bliss tomorrow, funerals next week,” he said to himself as he lay the gun on his bible which held his will. 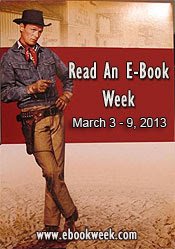 AC Adams wants to read him and heat you up! Read an E-Book Week let's him offer his goodies for free! Yes Free! 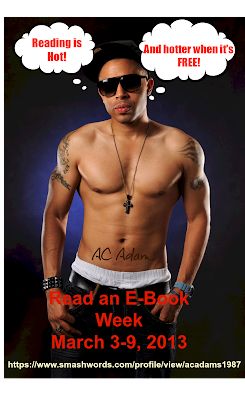 I Did the DooRag
Roommates
Roommates: Fish is Being Served
Roommates at Church
The Boat
and a bunch more of AC Adams titles on Smashwords

The Fear of Sex


"There is no one kind of book in the world. Nor should there be. Erotica has been around for a long time. It's probably as old as the acts it depicts. It can excite your own fantasies. Who is to determine what worlds adults choose to inhabit when they pick up a book? If a genre is well written, there's some truth to the story being told. The world is not a pretty place. Some authors choose to recreate a Cinderella like charm inhabited by princes and white horses. That's absolutely fine. Others choose to present the world in all it's gritty ugliness. That's why I like Charles Bukowski. In my opinion he told the truth. As fiction writers, we're all liars and a bit of a huckster. If we lie well, we sell well. If we hawk our wares, we sell even better."

Erotica/Sex is basically the adult play time. When we were children, we entered into fantasy worlds of Cowboys and Indians, Kings and knights, and even simple games of hide and seek, tag, and "it." So what's wrong as adults, with entering sexual games?  As children when playtime was over, we entered back into our homes or schools--which at the time was the real world. So what's wrong with adults entering into an adult play world? In my opinion sex is the adult playtime. Yet we run and hide from it or titter over it as if we're eight years old.

Perhaps we all would be healthier if we embraced that side of us, instead of suppressing it. Perhaps there would be less disease and teen pregnancy if we were more open about sex education. Some people have the ridiculous notion that by providing kids with sex education, we will make them more sexual. Well wake up, people. They are already doing it. And they're doing it where ever and whenever they can. So why not give them the tools for safety--condoms and contraceptives?

And if you don't enjoy erotica or sex, that's your right and privilege. But let the rest of us enjoy this second sexual revolution ushered in by knowledge, awareness, and Fifty Shades of Grey.  Afterall all of us got here because of one "pornographic" act in particular. 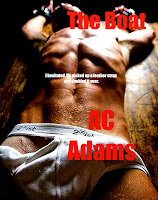 Website
Posted by AC Adams at 8:52 PM No comments:

From the Desk of AC Adams: 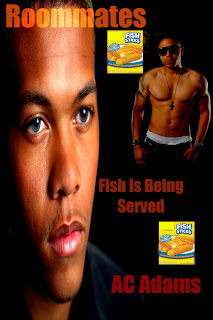 Many of you have enjoyed the popular gay erotica story Roommates. The story centers around Omar the "good christian boy" and Rock Hardwood his bad boy stripper roommate. Well hold on to your hats or your crotches. I've taken over from the master storyteller Charles Harvey. I'm now the new Author of these stories and most of the Erotica titles under Wes Writing.
I'm hard at work too (no pun intended.) The Roommate stories now appear with my name on the covers and  inside the cover the little short stories get hotter. Already, I've got Roommates: Fish is Being Served smoldering on Amazon, Barnes&Noble, Smashwords, and other online retailers. And you thought only boys were going to be in the stories. That bi-girl knows what to do with a strap-on. Under  the direction of Rock, she gives Omar a nice taste. Included with this story is the story Dick Dot Com. So you're getting two for one low price of $.99 (99 cents). And that's just the first new story.
Soon to come will be Roommates at Church. Close your Bibles and open your legs. There's no place too holy for these two. That story includes the bonus story The Road Trip. This is another thing I'm striving to do; I want to include  two stories in one, unless they are very long. So far they are short and to the point. Another bonus is a picture with each story. Just a little something to add value to your story experience. We have to keep them tame for some retailer's taste, but if you buy them from Amazon or Barnes&Noble, be prepared for the best.
The Roommate Stories are not Porn. They are erotic little tales written in a conversational style. It's like overhearing your neighbors through the wall without the "he said" "he said" crap. Collect all of them. They're good quick little reads. They're not a series. You can definitely buy them in any order you choose. But I suggest you purchase them all so you can see the character's develop. Are they inching toward a true relationship? You be the judge. If enough fans and readers root for them, it just might happen. 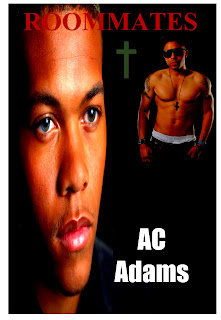 If you've purchase the Original under Charles Harvey, hold on to it. If you haven't read any, then start with me AC Adams. Look for other stories from me.

The BEAN: 200+ NEW EXHIBITORS IN BEA 2012: This is from a brief press release that went out yesterday - stuff I love to share. Areas of Growth Include Digital Zone, Children’s ...
Posted by AC Adams at 8:10 PM No comments: